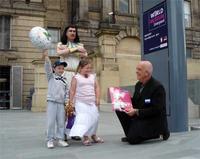 I called into the revamped Museum again yesterday to record the arrival of the 100,000th visitor since it re-opened as the World Museum only 5 weeks ago.
I was rather hoping that I would be the chosen one but I suppose I would have looked even sillier than usual holding a balloon and little goody bag. Instead, these two cute kids, Connor and Morgan Templeton where deemed to both be the 100,000th. The guy at the back is a youthful looking Egyptian Pharaoh I think. Also here is John Millard the ‘keeper’ of the Museum who was telling me how he always dreamt of running a museum were people would be flocking through the doors like it was a High St. department store. Now he has that, of course, it presents new challenges. It was certainly very busy as soon as it opened at 10.00 am but the place is now so big it doesn’t get too crowded. Still a big change from when I was young, I could hide away in the dark quiet recesses of the old building for hours.

Boudicca in my Kitchen

Out of the Loop